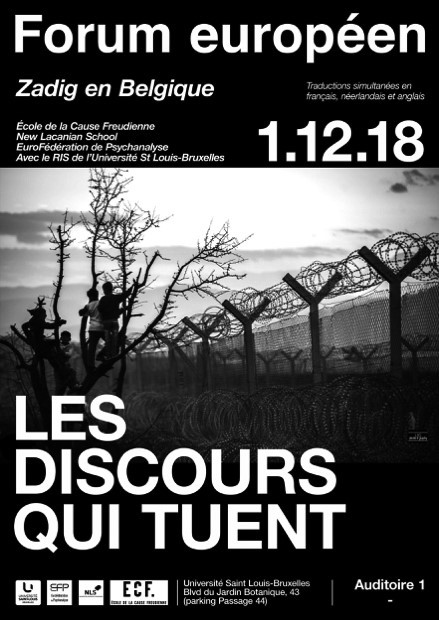 European Forum organised by the psychoanalysts of Zadig in collaboration with the Réseau Interdisciplinarité-Société (Ris) of Saint Louis university, with the support of the Ecole de la Cause freudienne (ECF) and the New Lacanian School (NLS), and under the auspice of the EuroFederation of Psychoanalysis (EFP).

Everyone, if such an expression is sustainable, would no doubt want the Nazi concentration camps to be a horror without tomorrow. Dr. Lacan, for his part, was without illusions and considered instead that their emergence, which introduced a rupture in History, represents the reaction of precursors to the social changes engendered by globalization and brought about by science. “Our future as common markets -he wrote- will be balanced by an increasingly hard-line extension of the process of segregation.” [1] Today, in Europe, we are there. The erasure of geographical and cultural boundaries has been accompanied by an escalation of statements promoted by the enemies of the human race in the 1930s. These have spread, while becoming banalised, in the discourses that found the social bond. The consequence is a radical rejection of the foreigner[l’étranger] by violent and criminal actions that have become daily.

So there are discourses that kill. Their character is insidious because they have nothing vehement. They do not call for killing, their language is smooth, politically correct. They present themselves as the expression of incontestable necessities written in the stars. It is not said that we must close the borders of the continent and let the migrants drown in the sea. It says rather: “we cannot welcome everyone, right?” The criminal action of non-assistance to people in danger is camouflaged behind a legalistic ethics: “I am only applying the Law”.

Worst. These discourses are not hateful. They are cold and rational, operating in the name of the well-being of nations. The agents of these discourses that murder present themselves as great servants of the State, or even as modern heroes sacrificing their humanity to do their duty. They claim they are just saying and doing what everyone thinks. In fact, they put the most lethal drives at the service of a so-called common good. Nothing is easier than to mobilize these drives since they are part of our humanity. But by appealing to this evil that is in each of us, it is the ethical dimension that is flouted. Because the fact that we can all have murderous fantasies does not justify acting on them.

There is a great risk of becoming accomplices if we let ourselves be put to sleep by these discourses that trivialize the worst. At the European Forum on 1 December 2018, we will try to de-trivialize them by showing their diabolic stand. These ideologies, which claim to be neutral, but which are criminal in their consequences, cannot be counted among the legitimate elements of democracy. It is therefore a question of producing a discourse that resists and combats the discourses that kill.

For the Organising Commitee of the Forum