European Congress of Psychoanalysis
By vidéoconférence, the 3rd & 4th of July 2021

Wanting a Child?
Desire for Family and Clinic of Filiations 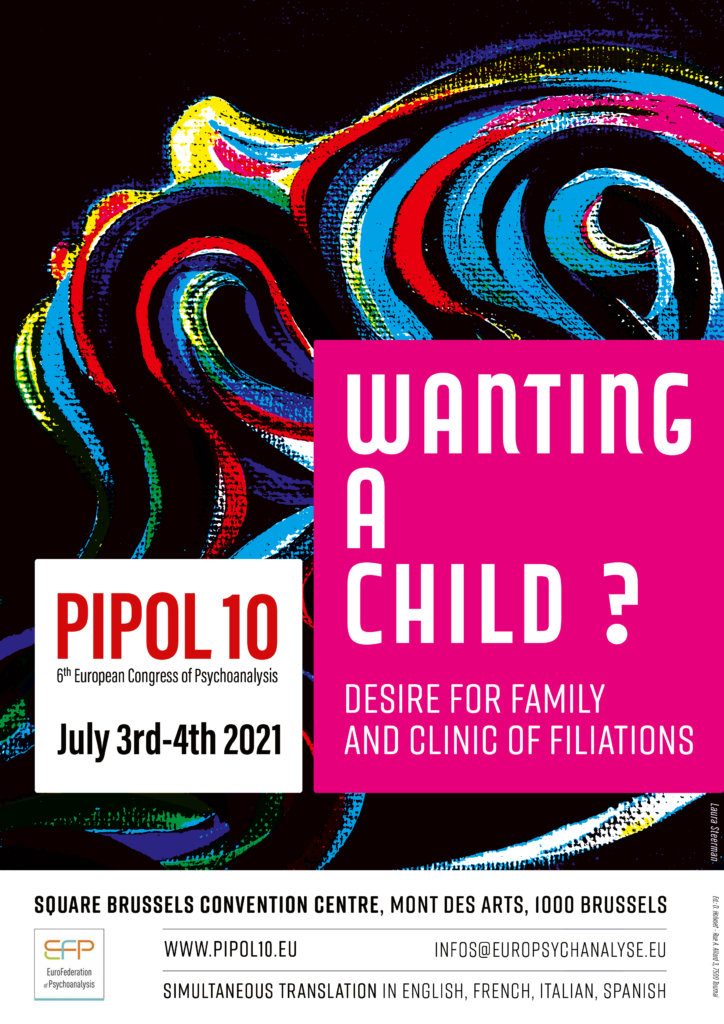 Desire for Family and Clinic of Filiations

From 1938 Jacques Lacan poses the human family as an institution[1]. The frantic attempts to reduce it to a biological fact are part of a lost cause aimed at protecting the natural order of the real, particularly in relation to the questions of reproduction and sexuality. The illusion of a so-called natural family has been shattered from the moment that science impacted on nature and the real therein escaped, provoking great disorder in the traditional structures of human experience. It is against the background of these mounting impasses that Jacques-Alain Miller, in 2012, called for an updating of our analytical practice[2].

Technological interventions in human life have thus produced “increasingly numerous and surprising disruptions in the fields of procreation, gender and filiations”[3] placing us “in the presence of a fragmentation of the biogenetic substance of parentage”[4]. Wanting a child, touches on the demand of obtaining a product from the marketplace, made available by the grace of science. Pre-implantation diagnostics opens the door to an unprecedented demographic disequilibrium regarding the choice of sex, or even to the worst temptations of eugenics. The business of conception requires regulation. To the great cultural variety of systems of kinship, as identified by anthropology, is substituted the diversity “of laws which determine the facts of nature proper to specify the relations of parentage”[5]. As psychoanalysts we cannot deny this real outside of nature because “the refusal to accept this fact in the symbolic will return it to us in the real in a much more threatening way”[6].

For Freud the desire for a child comes to the woman as phallic compensation for what she could not obtain from her father. The symbolic equivalence child-phallus thus installs the progeny as a substitute for the lost object of desire. This is the case most open to our interventions, Dr Lacan recalled in his note[7], when the child does not come to saturate the mode of lack by which the desire of the parent is specified. But the hijacking of procreation by technology certainly de-veils more than what nature modestly covered, “the false evidence of the natural bond and the universal of the desire for a child”[8]. What Lacanian psychoanalysis reveals is that desire here comes to dress up a particular want to enjoy [vouloir de jouir], of the child. Even if, in the name of a god-father, the old discourses continue to maintain that one should not touch reproduction, sexuality or the family, these attempts to curb jouissance in this way will not resist the reconfiguration of desire at work in these new forms of unprecedented alliances. Nonetheless, “if psychoanalysis cannot be the instrument of social conservatism […], it cannot subscribe to all the aberrations of desire”[9]. The psychoanalyst supports the necessity of an incarnated desire which is revealed in the particularised care of parenting – a term more fitting to our age than that of mothering – knotted to a human formation operating as a brake on jouissance[10]. This formation is today incarnated in the notion of family more than that of a god-father. It is a residual family, a contraction of all the forms of families invented over the centuries that “highlights the irreducibility of a form of transmission […] implying a relation to a desire that is not anonymous”[11]. Lacan noted almost a century ago that this nuclear family did not depend on forms of kinship but on those of alliance[12]. We will have to explore new forms of alliances in order to detect the impossible which in each case constitutes the symptomatic bedrock. We will also have to explore how the names of father and mother are nowadays being reworked in the world of contracts which knows no limit[13]. “Faced with these very rapid changes in the use of names, psychoanalysis and its discourse on the father and mother is summoned in various capacities”[14], Éric Laurent in turn notes. Parentage is thus found caught in a vertiginous relativism because it is defined as a legal system separate from any historical tradition. This mounting recourse to recognition by the law, there where symbolic recognition is lacking, leads us to a world of standards disjointed from an operator of incarnated desire. Consequently, that which will will keep us to the fore are the usages of the names of parentage specific to each one in constructing themselves as sexuated being. The neologism of parenthood testifies to this mutation: “the unique signifier that comes to replace father and mother, it belongs to the era of disjointed and scattered ones”[15].

Having a child offers the parent “the very object of his existence appearing in the real”[16] which calls hollow the maintenance of a permanent conversation that would ensure the propagation of operators capable of incarnating a desire refraining jouissance.

The question mark in our title interrogates the will [vouloir] at stake in procreation. The emphasis on the desire for family indicates that one never makes a child all alone; that his arrival necessarily inscribes him in the practice of lalangue where he falls.

It is from this immersion in language that the parlêtre will retroactively question the place from where it came to be lodged in filiations. Whether it comes from an egg donation, cryopreservation of gametes, zygotes or embryos, possibly before a change of sex; for others from a gestation, donation of uterus, or from a predictive selection of embryos, or from a simple sexual relationship; the living being that results will always bear the imprint of the sign that saw it born as a speaking body, [the] enigma of its coming into the world, [the] mystery of the union of speech and body[17], “fault of the real that no biotechnological engineering can fill”[18]. It is this mystery that Pipol 10 will work to elucidate, starting from the speech of the analysand which alone will permit an aggiornamento of Family Complexes in the 21st century!